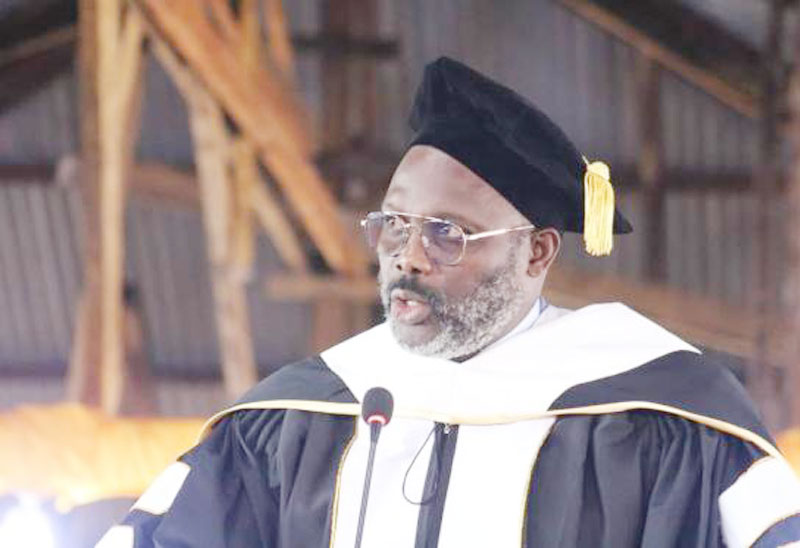 Liberia “Be Yourself, Know Your Calling”

President George Manneh Weah has admonished graduates of the United Methodist University (UMU) to be conscious of their personal lives and understand what to pursue as they step into the world of opportunities.

Addressing the 18th Commencement Convocation of the University as keynote speaker, Weah said the need for the output of the graduates to be exceptional when called upon to serve cannot be no overemphasized, knowing that professional, qualified competent UMU instructors and administrators exhausted all required to prepare them for the degrees they have earned.

“Every step you take beyond this day, whether at home or abroad, will reflect on this University. Let your output be exceptional wherever you are assigned. I am not asking you to carry the world on your shoulders, nor am I asking you to do more than what you are able to do. Just be yourself and know your calling,” he told the graduates.

The Liberian leader spoke on the theme "Your Journey into the World." “I have selected to speak to you about your journey into the world because you are going to represent the Republic of Liberia as well as the United Methodist University wherever you go. Technically, you got here because you work with others. For some, the categories of people that I just mentioned may have given you great support, and maybe even caused you some setbacks, while others may have presented you with challenges that positively shaped your intellectual position in life,” he said.

He cautioned the graduates gathered at the University's emerging campus in Doemah Town, Robertsfield Highway, to be mindful of peer pressure or decisions about their own lives brought to them by other people around them.

“Your journey into the world should not be determined by your friends or those around you. You may consult and seek advice, but ultimately, the final decision should be made by you,” Weah said. “As you step out of the ship called the United Methodist University, be prepared for the challenges that await you; fitting yourself into the job market, adjusting from student life, and the reality of taking care of your families.”

He further admonished each member of the 2022 graduating class to take with him or her what was imparted by the University.

“There are graduates of this University throughout the world who are performing well because they were given quality education by the United Methodist University. I am a witness because many such individuals are working with me in this Government.”

Weah, a Methodist by denomination, said he is glad that the Methodist Church is contributing to the establishment of light through the education of many young Liberians and other nationals who are residents in the country and accept the quality of education offered by the University and many other universities across the country.

To the graduates, he said: “I want you to do well so that the torchlight that the United Methodist University represents to the world will keep shining because as your Class Name implies, that light should never be hidden.”

The 18th graduating class took on the name “Tiē LĒĒ bíí,” a Mano dialect phrase that means, “Light Can Not Be Hidden”.

Making emphasis on the importance of education, he said and repeated that he loves education and, as such, he is not a friend to anyone who may have the opportunity to learn but refuses to take advantage of it.

He expressed his joy that his own younger sister, Wanita Weah, was a member of the graduating class.

“My younger sister, Wanita Weah, is a member of the graduating class today. Four years ago, when her mother passed away, Wanita was very devastated and did not want to go back to school. I encouraged her to go back and finish school and told her that, as a big brother, when she finished, she would get all the support from me that she would need to get a good start in life. She took up the challenge and enrolled at your University. I am so glad that she accepted my encouragement. Today, she is graduating with honors,” Weah said.

He added that he was happy that his sister kept her side of the bargain and he will do all he can to make sure she gets all she needs to live a happy and prosperous life.

“Wanita, like all her fellow graduates, is now equipped to stand on her own two feet and face the world to take maximum advantage of the opportunities that will come her way. She has always been an enterprising businesswoman. Now, with the skills that she has acquired, she will be an even better and more successful entrepreneur,” he said with confidence.

Weah explained that he believes that education is the most effective enabling enterprise that can enhance the total value, and maximize the full potential, of a nation’s greatest and most important natural resource: human capital.

He noted that because he loves education, he has, over the years and even now, paid the tuition of thousands of young people at all levels of academic education, including ensuring that some got their tertiary degrees.

“Since I became President, I have also encouraged the members of my own family who have not yet finished school, to seek to better themselves by returning to school and completing their studies. As a matter of fact, I have discouraged any of them from coming around me if they were not enrolled in a school program that will lead to some sort of diploma, degree, or qualification. Many of them thought that I was joking, but they soon found out how serious I am about this,” he said.

President Weah gave out to the administration of UMU US$433,334 (Four hundred thirty-three thousand, three hundred thirty-four United States Dollars) as a refund for all graduation fees collected from the students.

Bishop Samuel J. Quire, Resident Bishop, Liberia Annual Conference United Methodist Church and Chairman of the Board of Directors of the United Methodist University, thanked President Weah for the gift to the students and his general continuous support to the education sector.

To the graduates, the Methodist Bishop said that as they have walked from the walls of UMU, their light has already begun shining and it shall continue to shine in their favor.

He challenged the 1307 graduates to go out with that confidence and know that the difficulties and extreme situations they would go through would be a success story each.

“One author said, 'Tough times never last; only tough people.' Be tough; go in the world and shine.”

Rev. Dr. Julius Sarwolo Nelson, President of the University of Liberia, congratulated Rev. Dr. Yar Donlah Gonway-Gono, President of UMU, and her team of instructors and all other staff, for the job well done.

“Prof. Gono, we are here to celebrate with you. We are here to rejoice with the United Methodist University family on this auspicious occasion. Thank you very much for imparting knowledge to the young people of Liberia. Let us continue to work together in the educational sector of the Republic of Liberia,” Nelson said.

He admonished the graduates to continue learning, most especially by seeking more higher education.

Of the 1307 graduates, 41 came from the Agriculture Department, while the College of Theology consisted of 12 graduates and the College of Education, 55. 164 graduated in Sociology, while 33 graduated as Social workers.

From the Mass Communication Department, 21 were conferred degrees upon, and 13 were qualified from the Political Science Department of UMU.

In Biology, 112 were conferred degrees while 9 came from the Chemistry Department. In Information Technology, 24 were qualified while 181 became nurses, and 30 others qualified to become midwives.

For Economics, 70 graduated and 85 others graduated in Procurement and Supply Chain Management. In Banking and Finance, 15 graduated.

President of the United Methodist University of Liberia speaks out