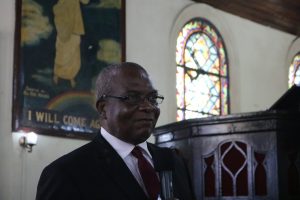 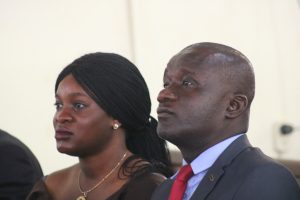 The National Legislature of Liberia on 27th November 2018 donated over $10,000 United States dollars to the #GivingTuesday program of the United Methodist University of Liberia (UMU). “We want to see this university relocated to its proposed site where education will be provided for the Liberian people in a more conducive environment,” Hon. Johnson N. Gwaikolo said. Representing the lawmakers, the former UMU president said moving the university has been his long-standing dream even while he was serving the university.

For his part, the Resident Bishop of the United Methodist Church in Liberia, Rev. Dr. Samuel J. Quire, Jr. said plan to relocate the university is long overdue and that immediate actions on the part of the university authorities to set the plan in motion was required. “I want the next commencement convocation to be hosted on the grounds of the new site of the university,” he asserted. Bishop noted that while #GivingTuesday remains a worldwide giving initiative by the United Methodist Church for the support of Advance Projects by the General Board of Global Ministries (GBGM) Advance’s Office, it was the duty of local United Methodists to contribute to the initiative at home and overseas. “Due to your support for the “Liberia Project” during 2017 #GivingTuesday Campaign, we were able to make significant progress on the development of the land, completed architectural designs with approved Building Permit from the Ministry of Public Works,” Bishop Quire affirmed.

Though the #GivingTuesday program was held alongside the global United Methodist Church #GivingTuesday, the over $15,000 United States dollars that was raised on November 27, 2018 is expected to fund the university’s relocation initiative dubbed the “Liberia Project” of the of the GBGM Advance Asking. Also donating to the #GivingTuesday program was the Guarantee Trust Bank in Liberia with the amount of $5,000 USD. The 12 years “Liberia Project” is expected to cost USD $34,000,000.00.

Now, the United Methodist University has over 6000 students on four campuses across Liberia in Gbarnga, Bong County; Ganta, Nimba County; Gbazon Town, Sinoe County; and Monrovia, Montserrado County, respectively. The unprecedented growth rate in students’ enrollment records have led to the facilities being overwhelmed and congested.